Carve A Pumpkin With Me, Same Time Next Year


I am horrible at carving pumpkins. Horrible. No, that isn't an exaggeration.  One year, I carved the eyes too close together and the face fell in on itself. Last year,  somehow I carved the top smaller than the opening and I couldn't keep the lid on without the help of toothpicks placed accordingly.  This year, I broke two of the carving utensils and poked my daughter in the arm with the main metal piece I used to carve the eyes.  Needless to say, my daughter carved a Star Wars Storm Trooper, I carved a hot mess of an excuse for a pumpkin.

With all that being said, Lily and I had fun this evening.  We spread the newspaper out on the counter, she washed the pumpkins down with a wet rag out on the front porch. She brought them in and we located our carving utensils. We set out to work on our masterful creations.  Side by side, wearing our aprons tucked under our armpits as not to ruin our clothing, Lily and I stood at the kitchen counter.  She smiled when she realized her creation was actually going to happen. We giggled and visited about what our plans were and what part of the pumpkin we would tackle next.  She told me that she wasn't going to get upset if it didn't look quite like the picture because she was having a good time trying.

A good time trying.  When does a 12 year say something like that?  When she finished, Josh and I made a big deal out of her out of this world pumpkin. No, neither of us will ever win a carving contest. But you know what we did win? We won by spending time together and enjoying each others company. We won as we worked as a team cleaning up the guts of of orange creations. I as Lily's mom won when I approached her from behind and kissed the top of her head as she was washing her hands at the kitchen sink.

"Mom, I am so glad we carved pumpkins tonight. I had a really good time. Maybe next year we can get even more pumpkins!"  Yes, Lily. Let's do it again. Same time, next year.  More pumpkins, more time spent with each other, more smiles and more giggles.  I treasure these moments with Lily. I always will. 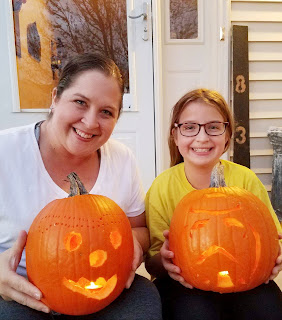 at October 28, 2018
Email ThisBlogThis!Share to TwitterShare to FacebookShare to Pinterest