When Sealants at the Dentist Bring Joy 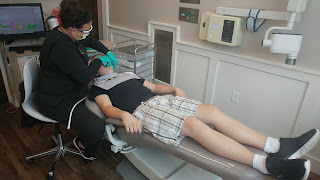 My 14 year old son Zach went to the Dentist today. He had his teeth cleaned two weeks ago by Dr. Holder and we returned today for 4 sealants. Zach has Autism and finds all things involving dentists and doctors challenging.  He did an amazing job when he got his cleaned and I have been praying about sealants. I have been praying that he would be calm, that he would keep his mouth open and at just the right angle for easy access and that they would actually be able to complete the job at hand.

Zach had the pleasure of meeting Melissa at Carver Dental. She will forever be known as Dental Hygienist Extraordinaire in the Gavin home. She had heard that Zach likes sports and made sure that she already had ESPN on before he entered the room. She took time to review the Vikings schedule that Zach showed her and talked about what games she is looking forward to.  She told Zach that the Gophers play tonight too. And that her favorite sports team was the Twins.

When it came time to start, she adjusted the tone of her voice, explained what each utensil was and reminded him, nothing would hurt. He said, nope, no pain and smiled back. She also reminded him that he needed to keep his mouth open as much as possible and that she promised to wash his mouth out after each step.

Who would have ever thought that sealants at the Dentist would bring JOY?! Zach was so proud of himself as Melissa continued to to praise him . He said-   I am so proud! - at the top of his voice and declared his happiness to the entire dental office. Melissa told him how impressed she was with Zach and that he had done better than all the other kids. As in ever! My mom heart soaring, she then turned to me and said she was able to seal 6 teeth total instead of the 4 we planned on. He did amazing. Melissa smiled ear to ear as she escorted us out to the lobby to claim Zach's two promised prices.

Zach couldn't stop proclaiming what a good job he did, I had a goofy permagrin on my face and even the front desk attendant and woman in the lobby got to witness the close of a fantastic dental experience.

I learned a valuable lesson today. Never again will I fear or worry about a dentist appointment for Zach.  I will continue to uplift the entire situation in prayer and remember that JOY can be experienced in something as simple as sealants.
at August 31, 2017
Email ThisBlogThis!Share to TwitterShare to FacebookShare to Pinterest