Lily was just on the phone doing a phone interview with a magazine about the reading to dogs program at the library. She begins new therapy dog testing (for dogs and owners in September). I was sitting on the couch with her and smelled a strong burning smell. I ran into the kitchen and found that Zach had started a towel on fire by accident. I am cooking green beans and boiling potatoes. Zach washed his hands and threw the towel on the stove rather than hanging it back up. He then, from what I can figure out, grabbed the edge of the towel and threw it on top of my keurig. I run in, spy both burners are fine and see the green towel on fire and black and smoldering with embers. I grabbed it threw it in the sink and turned on the water to put it out. I then calmly returned to Lily as she finished up the interview. Believe me, all is fine. And my keurig is no worse for wear. So yeah. Just another day at the Gavin's. 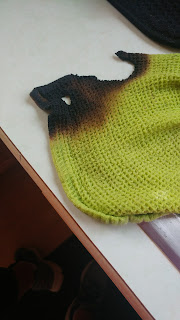 at August 31, 2017
Email ThisBlogThis!Share to TwitterShare to FacebookShare to Pinterest