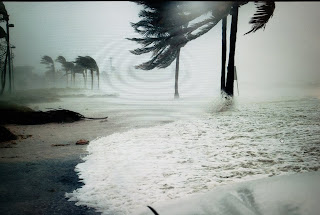 I watched the waters approach the shore.  They seemed to get higher and closer by the hour.  I asked when we were leaving at least every 15 minutes. The answer was always- soon.  Soon turned into too late.  And too late quickly turned into panic.  I was informed we would have to stay and wait out the storm.  I felt irritated and inconvenienced before I became sick with fear of our pending fate.

I stood on top of the bed when waters rushed in through our first floor sliding door that opened up onto a private patio. My husband quickly moved me to the dresser when the mattress became soaked as I felt I would fall into the rising waters.  I screamed when the dresser drawers opened from weight of the current.  My husband kept telling me we would be fine, but he sounded more irate with the fact that I was in a panic.  He finally agreed to head upstairs to the second floor of the hotel.  He picked me up and grabbed our one bag which contained a change of clothing for each of us,  his wallet and my purse.  When we got to the hallway, he quickly set off to the right where the closest stairway was located.  By the time he had reached the sixth stair, the water sloshed below.  He set me down on the stairs and I caught the look in his eyes.  He longer believed that we would be fine.

A large group of other hotel guests congregated at the top of the stairway.  They took my hand and my husband's hand and acted as if they were pulling us to safety, out of harms way. I smiled at the first woman who greeted me.  She embraced me tightly, I believe more so to comfort herself.  There were 12 of us.  We would wait out this storm together on the 2nd floor of The Waterfront Plaza.  The waterfront was no longer, as the majority of the sand, ornamental rocks and tall pampas grasses that were seen on the shoreline the night before, had now taken up residence in the first floor of the Plaza.

As we made our way towards the hotel rooms of guests that had their doors open, my husband turned quickly as we all heard screaming coming from the bottom of the staircase,  He ran to top of the stairs and most of us followed quickly behind.  A young man whom I recognized from the dining room the night before clumsily made his way up the stairs as my husband and another gentleman grabbed his armpits to pull him out of the turbulent waters. He was carrying a large laundry bin over his head trying to avoid dropping the contents in the water. He was greeted and told everyone thank you for helping him. He proceeded to share with us that he had swam from the far side of the hotel from where the kitchen was located. He said he grabbed as much food as he could carry.  He knew there wasn't very many guests staying at the Plaza as Hurricane Season was known to hit hard in this region.  But he knew most of them were already on the 2nd floor.  He was surprised to find that all 6 couples staying during the week at the Plaza were all present and accounted for.  He began to step out of his shoes.

I went to the bin and tried to see if anything needed refrigeration.  I pulled all the ham and turkey and chicken and cheese and handed it to waiting hands next to me.  I then made an assessment of everything else in the laundry bin.  Two loaves of bread, two large packages of cookies, 1 large box of crackers.  Three bags of chips, two bags of hard candies. And in the bottom, I found a sheet pan filled with fresh cooked fish.  I removed the entire contents to get at the fish and handed to pan up to let the other women figure out how to store it.  I saw my husband talking with other gentlemen.  They were filling bathtubs with water, gathering all of the towels they could find and pulling the drapes on every room that had an open door.

There was no more discussion of leaving the Plaza.  Only discussions of safety, food rations and what we would do when the electricity failed us.  All of the lights in the Plaza went dim 10 minutes later. Candles and matches and few lanterns with extra batteries were located in the Housekeeping closet near the top of the stairs.  The wind began to howl even louder and we heard the crashing of window panes below us on the 1st floor.  I didn't want to be anywhere near the glass. My husband and I took shelter on the floor in the hallway along with the 10 other guests and the hotel employee. Pillows and blankets were brought out to us and even more pillows were taken from unoccupied rooms. Mattresses were then pulled into the hallway when we realized that is where we would we all be the safest.

I wasn't sure sleep was possible that night. But somehow, exhaustion took a hold.  I woke with a start when I realized how quite it had become. My husband snored quietly next to me on the mattress in the hallway.  I sat up quickly, rubbing my eyes as I looked around.  The young man from the dining room remained silent but waved to me and motioned to me to join him. He smiled and handed me four crackers and a slice of ham.  I nodded in thanks but remained silent as not to wake the other guests.

I heard noise from below and walked in between the scattered mattresses and blankets in the hallway.  As I looked down the stairway,  I saw a man beaming up at me. He was floating with an oar in his hand in the brightest neon green kayak I had ever seen.  He hollered at me as if I was hard of hearing. He asked how many people were up there with me.  I told them 12. Well, 12 guests including myself and the young man from the dining room.  He informed me that he couldn't help right away, but would send help in boats in the next few hours to vacate all of us further inland. He asked if anyone was hurt, had any medical needs or if anyone was pregnant. All no, he smiled and promised, we will see you soon.  I stopped him to ask his name.  Jorge.  I was so very glad to see Jorge so early that morning.

I decided to let people sleep as long as they could. When people started to rise about a half hour later, the news that we would soon be rescued quickly circulated throughout our group. Rejoicing and hugging all around. Our rejoicing and hugging was short lived when we parted the drapes covering the inland facing windows.  Buildings were destroyed, and all of the cars had been either covered by the excessive amount of water or swept away. I could see people in the distance standing on rooftops and waving their arms out of upper story windows waiting to be rescued. Devastation continued for as far as my eyes could see.

Being taken to dry land by a fishing boat was bitter sweet.  I said a silent prayer for those that had lost loved ones and those that still were in need of rescue. I prayed for the local people who would need to rebuild their lives.  I shed tears for the families that were separated as the waters destroyed all that they knew and held dear.

We were back in the United States and home in our own beds three days later.  My husband was given the chance to retrieve the few belongings that still remained in our waterfront hotel room once the waters had receded a bit. There wasn't much left. But that was okay.  Clothing, trinkets, things could be replaced. Our lives could not.

I am not the same person I was before our Waterfront Plaza stay.  Neither is my husband.  That is probably a good thing.  I now think more about others.  I now pray more for others.  We won't return to the Waterfront Plaza. Not because we do not want to, but because the owners have chosen not to rebuild.  To rebuild seemed futile, as they had been forced to already do so twice in the last seven years due to the ravishing effects of previous hurricanes and tropical storms.  My husband said it had been rumored the owners were thinking about an inland restaurant.

Recently, my husband asked where we should vacation next spring.  I knew what I wanted to do. Somewhere surrounded by mountains and snow. Possibly skiing. He smiled as he pulled me closer and said we can go anywhere I wish.
at April 02, 2019
Email ThisBlogThis!Share to TwitterShare to FacebookShare to Pinterest