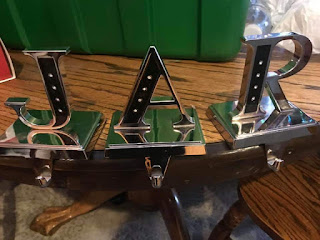 I was perusing the local sale sites on Facebook this afternoon. I spit out my tea when I saw this picture.  JAR.  They are initial stocking holders/hangers.  Someone obviously has three members of their family that have the initials J A R.  We do not have those three initials in our family. We have the J, but not an A or an R to be found.  However,  I have never felt the need to buy something more after seeing it online.  I think it is quite possibly the one thing my home is missing.

Josh and I have been watching a show on Fox called New Girl since it aired.  A goofball farce of show exploring all the the bizarre interactions and conversations between a hodgepodge group of roommates. Sometimes hysterical and tear inducing laughter, other times, heartwarming drama occurs.  But something that is bound to occur on each and every show is Schmidt.  Max Greenfield plays a character called Schmidt.  He is intelligent yet completely relationally unaware. He never seems to be able to do anything or say anything the way that he should.  And mostly Schmidt just says stupid stuff that doesn't make any sense. As in ever.

When I was growing up, my mother hated what she called Foul Language.  Foul language included words such as Crap , Ass, and occasionally Darn It. My sister and I found it hysterical that she was so sensitive to language and really pushed the limits just to see when she would get mad. She would joke that we always needed to pay her quarter if we used any foul language.  She never really enforced her rule, until one day I saw a glass Ball jar sitting on top the shelf above the oven in the kitchen. She was done. She wasn't having it.  At times it was so comical, she would stare us down and then shoot her eyes at the jar.  No words necessary. We had said something inappropriate and a quarter was now due.   The benefit of a "Swear Jar" was that I became very aware of my word choices.

I never became a person that swears.  I believe the words of our mouth are an outpouring of the true condition of our heart. When I hear someone swear every other word, I judge. It is something I am aware of.  I believe they lack the vocabulary skills to communicate effectively without using harsh consonant words, and I also believe them to be angry.  Why are people so angry?  They seem to be smiling yet swear words are the only words that leave their lips.  It just doesn't make any sense to me.

Years ago when I was a banker, I wasn't much older than the teens that worked after school on the teller line.  I overheard one young man whom I thought highly of swearing like a drunken sailor when speaking to a young lady behind the line.  No customers were present, but that wasn't an excuse. "Ryan! First, never speak like that when a lady is present. Second, what you doing? You will never impress a woman with a mouth like that. Get it together!"  My curt correction weighed heavy on him. He came to me the next day and apologized.  I told him I found it odd, because he never spoke that way in front of me.  Apparently, I was an adulting adult in his eyes even though I wasn't that much older.  "Ryan, speak to every person, man and woman alike, with care and adoration. Speak to them the way you would address your mother."  He heard every word I said and took it to heart. I never heard the drunken sailor persona overtake Ryan again.

Josh and I may never have a need for swear words, but we are kind of nerds. We says stupid things at inappropriate times. Sometimes intentionally to be funny, other times stupid just pours from our lips before we can get a hold of the reigns.  And for that reason alone,  the Schmidt JAR exists.  There isn't even a real jar. It is a well known expression.  When my mouth runs out of control, volunteers too much or shares inappropriate info,  Josh just yells, "JAR!"
When Josh makes a joke about how he teased a coworker, I sputter, "JAR!"  We laugh. It is our inside joke.  It is something that makes us smile.  And it is so much better than swearing.

Schmidt. JAR!
at December 02, 2018
Email ThisBlogThis!Share to TwitterShare to FacebookShare to Pinterest