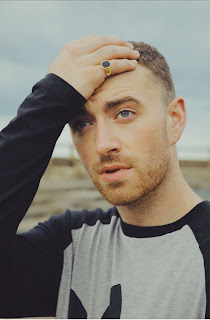 I love the music of Sam Smith. I wasn't sure about him at first.  That high falsetto was just too much for me. Slowly but surely, he grew on me. It was probably that duet of Lay Me Down with John Legend that got me.  Sam Smith's music quickly became my go to music. When I was showering and doing my hair and makeup, when I was doing the dishes and cooking, and driving to and from work.  I often would put on a full concert of Sam Smith songs in my car. Oh, those poor people who happened to be parked next to me at that light that never changes on Shady Oak. They were privy to many concerts.

I was in tears before 9 am today. Usually I will say that this is never a good way to start the day. But today they were tears of Happiness. Tears of Joy. Tears of Excitement. My husband told me that he was feeling good enough to take me on a much delayed anniversary celebration night out.  I was so confused.  Our 23rd Anniversary was June 24th. My birthday on the 25th and then Josh's birthday on July 30th. These normally fun filled occasions had come and gone quietly as my husband Josh hasn't been well in over 5 months.  (Bilateral Vestibular Dysfunction with Complete Vestibular Failure) I just thought maybe someday would we start celebrating fun events, but wasn't sure when that day would be. I was thrilled at the idea of spending an evening with Josh.  He said he had arranged childcare, and we would be leaving at 5:45pm for dinner at Wildfire. Oh how nice! I love Wildfire.

He then went on to say we had plans after, but he wasn't going to tell me anymore. More. There was something more.  I had just looked yesterday online and saw that there were a few acts coming to town.  Oh. My. Word. I screamed much louder than necessary,      "Are we going to the Sam Smith concert?!"  Josh can't lie. It was written all over his face. A smile from ear to ear.  My tears started quickly.  He told me how much he loved seeing me happy and excited to do something fun.

Josh went on to explain the most amazing story of how he came to have two tickets to tonight's Sam Smith concert. Everyone at the Lunds & Byerly's Prior Lake store entered a corporate drawing to win two tickets to the concert in the company suite.  Someone in his store won! Not only did they win, they weren't interested in the cocnert, knew that Josh would love to have these tickets for me and she gave them to him. SHE GAVE HIM TWO FREE TICKETS!!!  What a wonderful selfless act! And apparently she has done it before.  Absolutely amazing.  So last week when we went to Josh's work and I dropped him off for a meeting and so he could visit with his employees, they presented him with the tickets.  Amazing.

I can hardly contain my excitement.  I joked with Josh that I would have to figure out what shoes to wear because apparently my tennis shoes won't work with a nice outfit. I will have to figure out an outfit too.  This is hard stuff for me. The girl that loves tee shirts and yoga pants or long sleeve shirts and draw string pants.  This terribly casual girl is going to need to step it up a notch.  Might even break out the curlers.

So this is where I will have to keep you posted. I will absolutely post pictures and hopefully a video or two.  Because it is Sam Smith.  What songs do I hope to hear tonight? Drowning Shadows. Burning.  No Peace. The Thrill of It All. Too Good at Goodbyes. Leave Your Lover. Not In That Way. And pretty much every single song he has ever recorded.  I want to hear them all.


at August 14, 2018
Email ThisBlogThis!Share to TwitterShare to FacebookShare to Pinterest