The Last Picture I Will Take 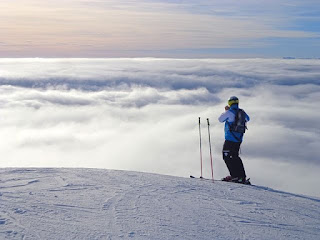 The Last Picture I Will Take
By: Kelli J Gavin

I stand here looking out over the blinding white snow, the white clouds, the white peaks.  Some say it is beautiful.  I think the stark landscape and the silence is deafening.

I never wanted to be a landscape photographer. I had lofty dreams of becoming a criminal prosecution lawyer.  I lasted two years into college and realized I couldn't do it.  Too much paper work, not enough court room exposure. Not what I thought it would be. Who am I kidding?  I was horrible at it.  I hated the work, I hated being told what to do and that I was always doing it wrong.  I was told I had an attitude problem and that I would never amount to anything.  I no longer desired to be a criminal prosecution lawyer, but I never really told anyone what happened.  I never admitted to a personal failure.  I told my family and close friends that it wasn't what I thought it would be and it didn't work out.  A few skeptical eyes lingered on me for longer than necessary.  Everyone kept telling me that I would figure it out.  That I would find something to do with my life.

If I was honest with myself, I didn't really want to do anything else.  I didn't possess talent of any kind.  I didn't want to work when I really reflect back on that time.  I enjoyed taking pictures, but only as a hobby.  One of my pictures caught the eye of an author friend of mine who asked for permission to use it on the cover of her book. I said yes of course, for a small fee and for a photo credit on the inside book jacket cover. Apparently, my friend is an amazing author. Her book sold over 500,000 copies in the first 3 months.  I said yes that she could use the picture because it was an easy $500.  The offers came rolling in. Some for portraits, some for landscapes. I guess I had a bit of talent.  I loved lighting, natural sunlight and discovered the natural beauty that is all around us.  The commission contracts were fantastic and I was able to quit my part time job within the first three months.

A wilderness and adventure magazine contacted me after they saw my pictures of Central Park. I enjoyed taking pictures of nature in settings you wouldn't suspect.  The film turned out great.  It appeared as if I was deep in the forest, when I was dealing with angry joggers and bikers who were competing for space at my heals on the walkway. I signed a two year contract with the magazine.  Not only did it enable me to travel and to research and request some of my own destinations, everything was paid for.  I traveled about three weeks out of every month.  And occasionally came home so that my friends knew that I was still in the land of the living.

I have now been taking pictures for 12 years and turn down additional business daily.  I am 34 years old, have more money than I will ever need and have traveled the entire globe.  I am lonely, wish for someone to keep me company and have always wanted children.  How did a job that most dream of turn into a distraction from real life? Apparently, women don't enjoy dating men who travel constantly.  I dated casually each time I head home to New York,  but my lack of communication while traveling, never encouraged women to stay around for very long.  I find myself contemplating what bachelorhood for life would look like.  It doesn't look very exhilarating to me. It looks like more lonely nights and an eternal empty bed.

This is my last assignment.  Quite possibly the last picture I will take. I am not filled with regret or even any emotion over this fact.  I was never meant to be a photographer in first place.  You do what brings you a little happiness and hopefully make some money along the way.  So long white snow. So long white clouds. Goodbye silence.  New York is calling my name. Home is calling to me.  The desire for a life well lived is shouting at me now.
at January 04, 2019
Email ThisBlogThis!Share to TwitterShare to FacebookShare to Pinterest