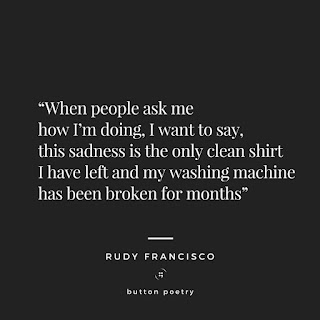 I have been reading a lot of small chapbooks and collections of poetry.  I keep going back to Rudy Francisco. A young, African American man of whom I know nothing else about. Yet continually, I find myself reciting his work to others and telling others they need to read his work.

I finished reading his most recent book called Helium. I didn't just read it, I devoured it. Couldn't put it down. Funny, heartfelt, deafening, hard to read at times, Mr. Francisco captures so much human emotion in single, simply worded sentences. Never embellishing or reaching, only using the words that he is comfortable with, he creates a bond with each individual reader. I have felt like that. I have smiled like that. That joy, I feel that joy right now. That pain, it hurts me too.

I look back on my life, all of my 42 years, and see a typical life. I was born to parents who loved me, had a sister who wasn't sure if I was friend or foe for my first 17 years, lived in small town, on a short dirt road with only three houses. I enjoyed friends and family and church and camp and exploring my surroundings.  I guess I had what could be described a happy childhood. I also knew how unique it was to be happy.

In 3rd grade I learned what child abuse was. My friend was crying one day and I asked her what was wrong. She went on to describe what was happening to her and her sister in their home at the hands of their father. I knew it sounded horrible and not right. I told the teacher. My friend wasn't at school for a week. The kids had been removed from the home, and the parents were questioned thoroughly. I was informed by my teacher and the principal that I had done the right thing and that I should always go with my gut instincts when something doesn't "feel right" and tell an adult.  The claims that my friend made were false. She was lonely, wanted attention and was too young to realize how something like this would play out if she made a false accusation.  We weren't friends after that.

The summer before 5th grade, I learned what it was like to be bullied.  But that was before it was called bullying.  That was when it was called boys will be boys. He must like her. I was at summer camp and had a ridiculously cool jacket. Or at least I thought it was cool. There was a boy present who I didn't know prior to camp and he became obsessed with my jacket. Constantly cornering me and telling me I needed to give him my jacket. One day he chased me down a steep hill, tripped me so I would fall and began to remove my jacket. I was screaming and crying for help, and not one person responded. Not one adult. Not one child. In broad daylight, a boy was pinning me down to the ground and removing my clothing and no one came to my aide. When I went to the nurse to get help with the wound on my leg and one on my forearm from trying to fight him off, I was told he had special needs. Back then the word they used was disabled.  As the nurse washed the dirt from my arms and legs and pulled pine needles from my hair, without looking me in the eye said, "You should have just taken off your jacket and given it to him."  I learned a lot about boys that day. But I learned more about how little adults thought about girls.

When I was in junior high, a girl tried to kill the principal by putting rat poison in his coffee. I heard her joking with a friend and they laughed and laughed. She opened her denim purse to reveal a plastic bag filled with a white substance.  I quickly looked away and acted like I hadn't seen a thing. She was a mess and was always getting into trouble. I thought it was drugs and reported her. She never came back to school. I heard what her intent was and what the substance was as the rumors spread like wild fire. I then read "the story" in the National Inquirer. My mom said, "Kelli, did you know about this? It happened at your school."  I learned a lot about evil hearts when this happened and figured that she was maybe labeled a bad girl for a reason. But I was overcome with emotion of what her life must be like to think hurting another person, killing someone was something she could do.

When I was in 10th grade, a very attractive senior guy approached me. I could hardly contain myself. He propositioned me right there and then in the lunch room. I was dumbstruck. Couldn't speak. He said he felt this was the best way to ask, where I couldn't say no, because he promised me it wouldn't end well.  Not only did I decline him as all of his cronies looked on, I proceeded to give him a tongue lashing that included phrases like, "I suppose it is hard when you believe you are God's gift to women that a girl would ever say no to you. Not only am I saying no. I am saying never. And all the girls that say yes. They are needy and lonely and will never amount to much.  My self worth isn't found in what boy I choose to spend time with. My identity is in Jesus.  And Jesus tells me I am not missing much with passing up the likes of you."  Silence, and then laughter. Roaring laughter. He never spoke to me again, never approached me in the halls, never went out of his way to have an encounter with me.  I learned a lot about the power of words that day.

When I was in college, my sophomore year started a little bumpy. I was engage to be married the following summer and was so excited. I reviewed my finances and found that putting myself through college wasn't working. I wasn't receiving enough in grants and loans and scholarships. I was working two part time jobs that I didn't like and I could barely afford to exist.  Every penny went towards room and board and books.  I knew I needed to drop out of school because I had exhausted all of my resources. I knew I had to meet with my adviser who also happened to be my professor.  I told him my entire story about doing everything I could and I was tapped out.  He asked about my parents, their finances, grandparents, extended family, suggested more loans. I told him I didn't come from money, grew up on food stamps and government cheese and didn't have anyone else left in my life to ask for money. He looked at the ring on my finger and said, " I know you are getting married next year.  You are making the biggest mistake of your life. If you had tried harder in high school you would have gotten more scholarships." My heart broke a bit that day due to the hurtful words of a professor I admired.

All of these events happened to me. Happened around me, near me, in front of my eyes.  They hurt, they wounded, yet they molded and enhanced who I am today.  These experiences were sad, some horrible, but my life is what I have made of it. There are probably 100 more of these happenings that contributed to who I am and what I think. I have formed habits based on life events. I have pursued certain things, and avoid others. I have run head strong towards things I desired and backed away slowly from hurt and angst.

But sadness? Yes. There has been sadness. But the sadness isn't where I choose to dwell. The sadness isn't where I will stay camped out. I won't wallow. I won't take up permanent residence there.  What I will do, is refocus on those times that I learned something. Those times that I walked away in awe. Those times I smiled because it seemed like the most natural thing to do. The times when I was surrounded by those that I love. The times when heart to heart hugs warmed the soul and letting go wasn't something that I would ever wish for. I will also focus on the times when simple things such as a sunset, swimming in the pool with my children or a solitude walk have been the perfect close to an amazing day.

By focusing on these times of happiness, I have washed every item of clothing I own. I have folded them and hung them in my closet for future use. My washing machine has been serviced and I plan on doing my own laundry for the rest of my days.  I do not wear sadness well.

at January 24, 2018
Email ThisBlogThis!Share to TwitterShare to FacebookShare to Pinterest 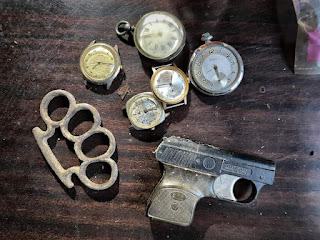