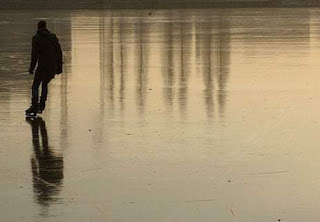 Understanding that he was upset with me yet again, I knew to just leave him alone. Whenever we disagreed, he wasn’t up for a fight. I appreciated the fact that he had lost his will to argue and walked away. I was worn out and did not possess an ounce of the energy it takes to engage with him.

Jonathan may be the smartest, most articulate man I have ever met. He graduated with honors in three years and then went on to receive two doctorates in the following four years. When he began to mansplain a simple concept, I sarcastically addressed him as “Dr. Jonathan” so that he would cease such obnoxious behavior. When he persisted, I reminded him that all of those degrees were absolutely not granted in the fields of common sense or how to pick up on social cues.

Wondering how long he would be out on the ice again, I knew that I needed to find something to keep me busy. After picking up two or three discarded books, I walked back to the picture window at the front of the cabin. This cabin that I adore has been in my family for as long as I can remember. Because we both didn’t mind the winter chill, we tended to be the only family members that planned multiple excursions up to northern Minnesota and the Gunflint Trail each winter. Enjoying the fact that we didn’t have to compete for space with my siblings or parents, we usually spread out throughout the cabin and sometimes even slept in separate rooms. Piling the beds with warm quilts and lighting a fire in both fireplaces helped keep us comfortable during our long weekend stays.

How was someone so tall and strong, so elegant? The way he crossed leg over leg, and glided in a perfectly straight line for such a long distance, made me believe he would, at some point, just keep skating away from me. When he grimaced to himself mid conversation and then said something like, “Let’s take a break” or “I’ll be back soon”, I knew that he would soon bundle himself up in every warm winter clothing item he brought with us and grab a hat, mittens and scarf from the basket by the front door. His too big parka zipped to his chin, he exited with his skates over his shoulder. He liked the bench to the left of where the dock normally resides in the summer. I had never been sure why he gravitated to that bench, but when he sat and methodically removed his tall winter boots and began to put on his skates is when my breathing had usually returned to an expected and normal rhythm.

I had always loved Jonathan. Since the moment we met. But I believe our love had changed somehow, even evolved into more of a comfortable companionship and mutual admiration rather than burning desire. I am sad to say that I enjoyed his silent companionship more than anything. When we played cards, watched a movie together or even read in the living room. Conversation wasn’t required. We may have looked at each other fondly while together, but neither of us felt compelled to speak anymore. He always kissed me each morning, when he returned from work and at night before bed, but that may have been the only times he touched me, and I was okay with this.

As I watched him step carefully onto the ice, he did a few gentle glides and then furiously began his endless cycle of crazy eights. Over and over again. I began to wonder if he ever became dizzy from his repetitive paths. If he did, he didn’t show it. Clapping his hands over his head a few times, I understood he was trying to warm himself up and increase the blood flow in his arms and hands. His movements were so predictable, I realized that his predictability is what calmed me. Yet annoyed me all the same.

When Jonathan came in from the ice, he was silent, as expected. I had prepared a simple lunch of grilled cheese sandwiches, tomato soup and apples. He smiled at my own predictability displayed on the small table in the kitchen. As he stowed his hat, mittens and scarf and removed his boots on the mat to catch the melting snow chunks, he looked at me, but said nothing. He never broke eye contact as he hung up his parka on one of the many hooks haphazardly nailed to the wall by the door.

When he walked to the kitchen to meet me, he sat and we proceeded to eat in silence. He didn’t even attempt to make a connection, but then neither did I. Five years together and this is what we had come to. Silence while eating grilled cheese and tomato soup at the table in the cabin’s kitchen.

“I am going to say something that neither of us want to hear or say. I love you, but I am no longer in love with you. I think you feel the same. I think we need to take a break. I have located an apartment and taken out a 3-6 month flexible lease. I can move in when we get home. I think we should use this time to decide what is next for both of us.” Jonathan calmly explained.

I didn’t cry. Not one tear. I reached out and touched his hand before I was ready to speak. Staring at my soup, a rush of emotion flooded me. It was a relief. It was the feeling of hope. It was a release from all the worry. It was needed.

“Thank you. For making this decision for us. To be honest, I don’t think I could have done it. But thank you for knowing that we need to do this. Thank you for enabling both of us to take the needed next step in our own lives.”

Jonathan held my hand firmly and then pulled it to lips and kissed it. “I respect you and myself enough to know that we can’t keep doing this. This silence, this walking on eggshells. And also, there aren’t any great skating ponds back home. I need to skate when I am frustrated. Where am I going to skate back home if we were to stay together?”

I began to laugh. Not just a giggle, but full on laughter. The tears came quickly as Jonathan began laughing. I was so thankful at that very moment for his awkward sense of humor. Laughing while parting ways wasn’t something that I ever expected to happen.

We laughed a bit more together as we chatted and finished our lunch. It registered to me that this was the last time we would be at the cabin together. And I was okay with it. We began to pack up our belongings and pick up around the cabin knowing we would be returning home a day early. I wasn’t concerned about what Jonathan would think, but as he drove, I reached out and held his hand for the better part of our drive back to Minneapolis. I knew it was the last time we would hold hands.

Now, ten months out, things are so much better. I enjoy my work again, I have made new friends and I joined a women’s art co-op. I am excited to spend this time with my family at the cabin this winter. When my brother’s kids run amuck, I won’t be overwhelmed and wish I hadn’t come the same weekend, but will welcome the chaos and all that comes with it. My parents were so glad I agreed to a family getaway weekend and even came a day early to prepare the winter cabin and make sure the refrigerator was full to welcome all the hungry mouths that would need to be fed. I am thankful for my family, for the cabin and for blustery winters which bring a thick sheet of ice to the lake. I am also thankful for my mistaken sightings of Jonathan skating his repetitive crazy eights. I know he isn’t there, but I will always love the memories of when he was.

at December 01, 2021
Email ThisBlogThis!Share to TwitterShare to FacebookShare to Pinterest