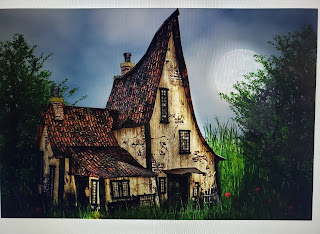 Into The Woods Is Where It Can Be Found
By: Kelli J Gavin
For Writers Unite!

As a small child, my mother once told me that she had a secret to share with my sister and I. I loved the idea of a secret being shared and immediately she captivated our attention. She pulled my sister and I near to her on the bottom stair of our small back porch.

"First, I need to disclose that I have never been able to find what I am about to tell you. When your dad and I moved into this home in 1972, Shirley who lives in the backwoods stopped over to greet us. She told me that she was never so lucky to verify it either, but she was also told that there may still be a fairy home in these woods. She and I walked these woods together and I firmly believe from the stories that she shared that it is true. Can you believe it? A fairy!"

Our eyes as big as saucers, she had our full attention. A real fair house could be in the woods behind our home but she and Shirley had never been able to find it? Even my young mind knew how outlandish the story sounded. Fairies were only found in books and in movies. I, at 6 or 7 at the time, knew better. I knew about Santa and the Easter Bunny and even The Tooth Fairy. My mother was a woman of her word. Why was she telling me a story about a fairy home if fairies weren't real?

"Mom, I think you are telling us a story. You are just teasing us." I spouted.

"Kelli, what I say is true. I have shared the story with you about the fact that it is said a fairy home can be found in the woods behind our home. It is up to you whether or not you believe it to be true. It is also up to you to decide whether or not you are going to search for it."

Angela, my older sister smiled as my mom stood up and opened the backdoor to enter our home.

"It isn't real. Just a fun story." Angela then stood quickly and ran off to play.

Sitting for a few more moments, I really contemplated what our mom had shared. I knew that my sister didn't believe it was true, but what if it was? Our dad was usually the joker, not our mom. So why would she share a story that wasn't true?

I decided right there and then I wouldn't say another word about it to my sister or to my mom, but I would keep my eyes peeled just in case I could find the fairy home.

I searched deep in the woods that summer. I checked under downed trees, and I attempted to move large bows that had fallen to the ground from the canopy above. I occasionally even brought a blanket so that I could sit on the forest floor and see things down below where only my feet would tread. I didn't see a fairy house, but I was thankful for the blanket. I avoided a mean patch of poison ivy and a few hungry giant ants.

Searching for the fairy house became something I would do almost daily, whenever I had free time and could explore. Really never giving up the idea, I may have even kept my eyes open even into my teens years. My rational mind knew that it wasn't possible, but it would make for the most fantastic story to tell others if for some reason I really did find it.

When I turned 16, my mom gave me the most beautifully illustrated book all about fairies. Originally written in the early 1900's, it was all about a young girl who was convinced that fairies existed and she documented her findings.

"Kelli, I know you are far too old to believe in fairies and the fairy home that I told you about when you were little, but I thought you would appreciate this book that I also enjoyed when I was young. I also wonder if it won't inspire you to write a few more stories about the fairies that we have been told live behind our home."

Learning that afternoon that my mom had shared the story with me to inspire me while writing and to fire up my imagination, I appreciated her efforts even more. My mom shared something special with me that she also adored. A story, a book and the desire to never stop searching for the truth.

I never did find a fairy home, but I continued to write stories, search for truth when need be and to always share the joy and fascination of what could possibly exist in the woods behind our home with my children now. My 14 year old daughter and 17 year old son no longer believe in such things, but my heart beams when my daughter will pull my mother's beloved fairy book from the shelf. She will sit on the end of the couch with the light shining in from the afternoon sun and marvel at the illustrations. She will smile at me when I catch her eye. The best stories are the stories that are passed from generation to the next. And I am sure my daughter will someday share the book with her children and the story of the fairy home behind their grandma's childhood home.

at October 25, 2020
Email ThisBlogThis!Share to TwitterShare to FacebookShare to Pinterest